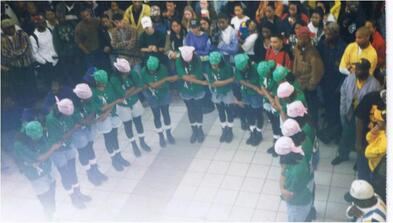 Despite the earthquake, which occurred just 8 days after the chapter was chartered, 1994 proved to be advantageous for Rho Epsilon who met with the President of the United States, Bill Clinton, when he visited the campus in June of that year.  Later that fall, Rho Epsilon worked with Associated Students to bring a famed member of Alpha Kappa Alpha Sorority, Incorporated®, Maya Angelou to CSUN for an evening of inspiration and restoration.  The chapter also has a bit of hip-hop history to add to their record.  In 1995, Rho Epsilon met and watched, 'the Notorious B.I.G.', arguably one of the best M.C.'s to ever live, perform on their campus which was his first and only performance on a California college campus.

Rho Epsilon implemented the following campus programs: the very first step show on CSUN's campus, campus-wide Breast-Cancer Awareness Week, and Walk, in which monies were raised for research and treatment. The first AKA Skee-Week. The first Male Auction, in which monies were raised for "Habitat for Humanity". Rho Epsilon founded and organized a chapter of the National Pan-Hellenic Council as a way to provide a forum to unite all Black Greek organizations on campus. Rho Epsilon implemented academic study sessions during finals week, partnered with the Boys and Girls Club of San Fernando Valley to offer tutoring and dance classes to youth, adopted families in need during the Holidays, and volunteered at local food banks.

Rho Epsilon was the first-ever Black Greek-letter sorority to be represented as University Ambassadors on the Homecoming court, winning Princess and Queen in 1994 & 1996, and had a chapter member represented on the court every year until Homecoming Week was dissolved in 1999.  Moreover, Rho Epsilon was privileged to co-host the Alpha Kappa Alpha Far-Western Regional Conference of 1996.

​Rho Epsilon Chapter is proud to continue its rich legacy, honored to carry out the principles of the illustrious Alpha Kappa Alpha Sorority, Incorporated®, and persists in being "Supreme in Service to All Mankind."